The L'nu - Mi'kmaq are the founding people of Nova Scotia and remain the predominant Aboriginal group within the province. The Mi'kmaw nation has existed in what is now Nova Scotia for thousands of years, and is made up of thirteen Bands/First Nations, each of which is governed by a Chief and Council.  We'koqma'q First Nation is the closest community to Lake Ainslie.  The L'nu have used the trails through Lake Ainslie to reach the Upper Margaree River for fishing eels and other fish. 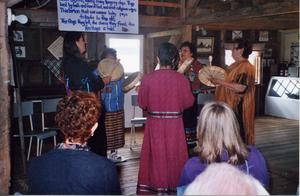