In the 1970s the last inhabitant of the house (Jessie MacDonald) moved out. Around the same time local community members and family members of the MacDonald's began to think about what they could do to remember the pioneers and preserve their way of life. A loose collection of people interested in their local history formally formed the Lake Ainslie Historical Society in 1977 with the goal of establishing a museum to honour the history of Lake Ainslie and the MacDonald family. The Great Grandson of Alexander MacDonald, Charles N MacDonald and his wife Jessie offered the home of his birth to the community group for use as a museum. Charlie was a founding member of the MacDonald House Museum (which was his childhood home). He was the first president of the Lake Ainslie Historical Society and on the Board of Directors of the Lake Ainslie Weavers Guild. Being very proud of his heritage and the history of Lake Ainslie, Charlie and his wife Jessie generously donated the property to the LA Historical Society. He served in many positions on the Board of Directors for the Museum/Historical Society, first as President and lastly as an honorary member. Charles N. MacDonald passed away on January 10, 2019 and Jessie (MacLean) MacDonald passed away on March 23, 2020.  They were predeceased by their daughter Gwen. Their son Allan Charles passed away 27 August, 2020.  The Society will be forever grateful to the MacDonalds for their generous gift, and for their pioneering spirit to remember the ways of our ancestors.

East Lake Ainslie is located in Inverness County, Cape Breton, Nova Scotia. It was first settled by Scottish immigrants beginning in the early 1800's. Among these pioneer settlers was Alexander (the Weaver) MacDonald, his wife Mary (nee MacLean) and their children. The MacDonald's settled on a 200 acre property approximately 3 miles from the north end of the lake on the eastern shoreline in 1823. In the 1850's (actual date unknown) the family constructed a new home which still stands today. The MacDonald family became the first merchants in the area and also had the first Way Station/Post Office. Over the years six generations of MacDonald's have lived on the property settled by Alexander. 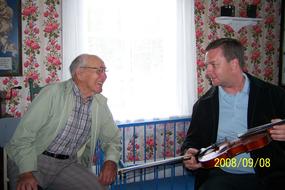 Visit our Lake Ainslie Stories on the Virtual Museum of Canada.